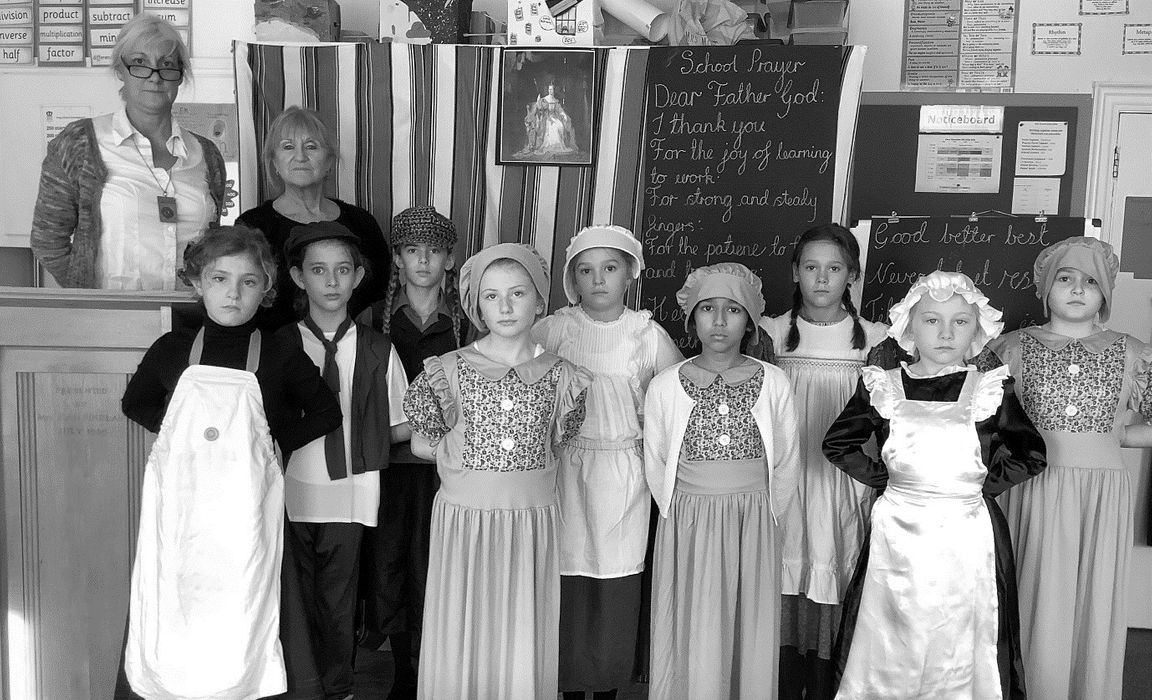 Last Friday, Class 5M had a day in the life of Victorian children. We were supposed to go to the Guildford Museum but, because of Covid 19, we couldn’t. It didn’t matter though because we had a brilliant day at school and dressed as Victorian children.

To start with, we stood on the landing and arranged ourselves into two lines of girls and boys. Next, we stepped into our classroom. It was like we had time travelled! Before long, it was time for lessons: we read a prayer, sang a hymn and also recited a poem.

Soon, we started writing. We were presented with black and white copybooks, a dip ink pen, a piece of blotting paper and a rag and we set off repeating the letters and words shown trying not to smudge. I found this task rewarding and satisfying.

After that, we were given a slate board and shown a stuffed hare’s head. Stuffing animals was a craze in Victorian times, called taxidermy. We were instructed to illustrate the magnificent representation of the art from Victorian times.

Soon afterwards, it was time for Drill, a wearisome activity said to make children listen because of a variety of strict instructions set to master simple exercises.

Later, we did some work on our samplers sewing cross stitch. Before long, our Art Professor arrived and we created some Victorian photography, which I found hard because we could not smile.

Finally, our day came to an end. In conclusion, it was an action packed day and I realised how much schools have come on since the Victorian era. But as much as it was fun, I’m happy that I live in 2020 not 1892!

Book a place at our next Open Event on Wednesday 12 May at 9.30am here. You can also view our Virtual Open Day.

Our Admissions Team are available to discuss new applications for the Prep and Senior Schools for 2021 and 2022. Please email: admissions@manorhouseschool.org

As part of the national response to Covid-19, the School site is currently closed to pupils, except those of key worker and vulnerable children. We continue to teach and support all our Prep and Senior School pupils via a virtual (on-screen) learning approach, enabling live lessons and engagement across all subjects. If you wish to access the latest initial information from our Headteacher regarding a return to school from Monday 8 March 2020, click here