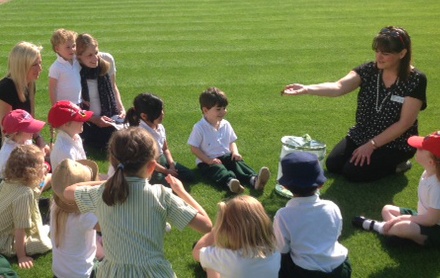 The children in Nursery have been learning about mini beasts this term. On Thursday the Nursery and Reception children released four beautiful butterflies into the garden.  They arrived four weeks ago as tiny caterpillars which grew and grew and finally turned into cocoons.

The children were delighted when they arrived on Monday morning to see that two of the butterflies had hatched. Two more emerged over the week and the children enjoyed looking after them and feeding them fruit and sugar water. We were sad to see the butterflies released but were entranced to see them fly away, especially the one that sat on Mrs Ferrey’s hand first.

There were lots of squeals from the girls and boys as they ran to the flower beds to see if they could spot them.