With the announcement of the General Election on 8 June 2017, Mrs Mayes,  who runs Debate Club, launched our very own school Mock Election.

The names of the main parties were changed to: The Plenty Party, The Freedom Party, The United Party and The Equality Party to encourage the girls to vote independently on policy and candidates.

The parties launched their campaigns by producing party political broadcasts which were shown in Assembly and campaigning began in earnest with the production of posters to create general awareness around the school.

On the day of the election, there was great excitement in Assembly as newly appointed Head Girl, Emily Strong,  ran through the arrangements for our Mock General Election, including introducing each of the candidates and their parties.

Our Senior Prefect and Academic Prefect presented their ideas on the importance of voting, sharing information on the suffragette movement and reminding girls of the importance of democracy.  Jennifer spoke of all the democratic opportunities available within our school environment including Food and School Council and the many opportunities given to the girls to get involved in big decisions and debate.

The four candidates, Emma, Kathleen, Bella and Marianne spoke eloquently and persuasively, engaging the audience with their passionate speeches.

Lauren, Deputy Head Girl, closed the Assembly with an emphatic plea to everyone to get their voices heard and vote at break-time.   Voting took place in Arcot Hall and there was an extremely high turnout, with girls queuing out the doors!

Kathleen from the Freedom Party won but all four candidates received prizes and gained a huge amount of respect from their peers for participating. 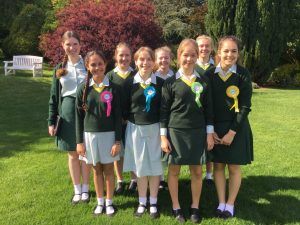 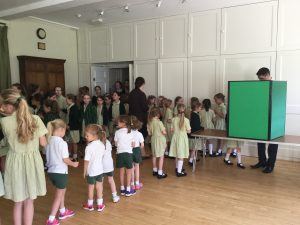