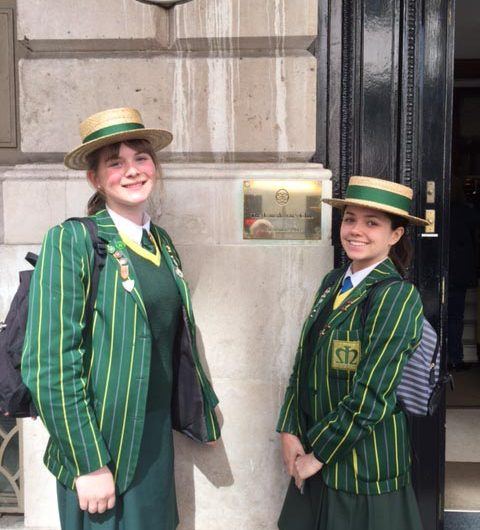 Senior Year 11 girls attended the 2017 AGM of the Queen Mother’s Clothing Guild, a clothing and linen charity, at the Lansdowne Club earlier this week. Presidents and Guests attended from across the UK. The School has supported the charity for many years. Their patron is Princess Alexandra, The Honourable Lady Ogilvy.

Speaker, Denise Bentley of the First Love Foundation, gave an inspiring talk about the essential work the foundation carries out in Tower Hamlets in East London supporting residents through their food bank and advocacy services.

During the speeches, Mrs Rachel Parry, Co-Ordinator for the Schools and DofE Scheme, specifically commented about Manor House School and how pupils had attended the Charity’s annual packing week…”The girls worked in two teams….they were especially pleased to be helping charities for the homeless and refugees, being aware of the terrible conditions they had suffered before arriving in this country”.  She commented on Olivia and Georgie (pictured here) and thanked them for their support and attendance.  At the meeting a member from Cobham also recognised the girls and congratulated the school on its continued support.

Later in London, the girls were stopped by Sarah Bonnie who declared she was a Manor House School girl some 24 years ago and had boarded in Bookham.