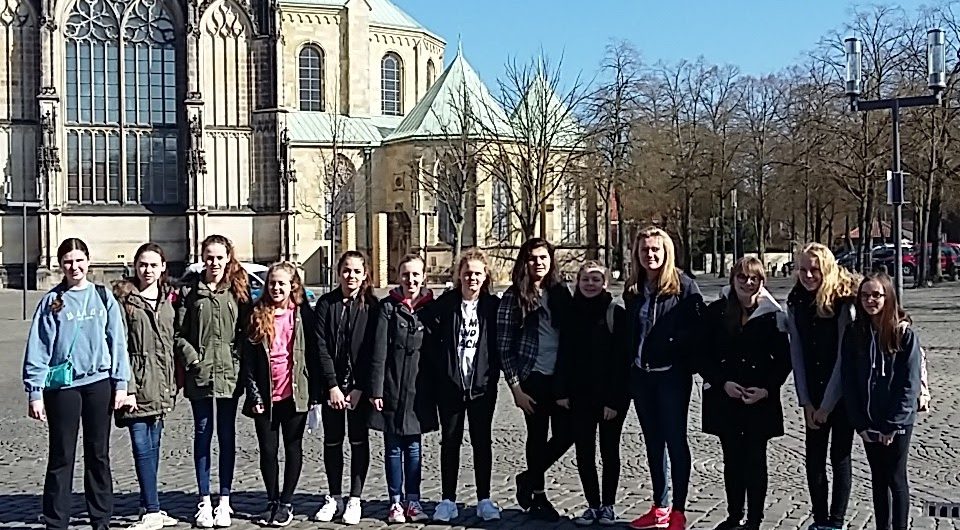 Last week, 13 girls from Manor House School were proud to complete their German exchange, which they have done with great success and excellent character.  Here, Mrs Peel, Head of Modern Foreign Languages, summarises the Exchange:

In March/April we travelled, together with a group of boys from Reed’s School, to the Märkisches Gymnasium Iserlohn, a large mixed grammar school about an hour from Düsseldorf airport. Everyone stayed in a German family, with their German exchange partner, even the teachers.  In May, roles were reversed and the German pupils came to England and stayed in families, again with their exchange partners.

Highlights in Germany included spending time in the German school, visiting Berlin, Münster and Iserlohn, shopping and trying German food. In England the German group enjoyed Madame Tussaud’s, the Tower of London, seeing Buckingham Palace and Big Ben. They were really pleased to spend time in school too, and were keen to try out wearing a uniform for the first time.

There have been some excellent group activities, such as German and English boys versus German and English girls rugby in the garden of a Manor House School parent. Also a 6 hour return train journey from Iserlohn to Berlin, during which new friends were made, long discussions held and card games won and lost!

The exchange was a great experience for all, and several families have started to arrange repeat visits. We have had several successes with girls in previous years who have visited their exchange families again on their own or with their families, arranged their work experience at the school in Iserlohn, and even attended weddings and other family occasions.