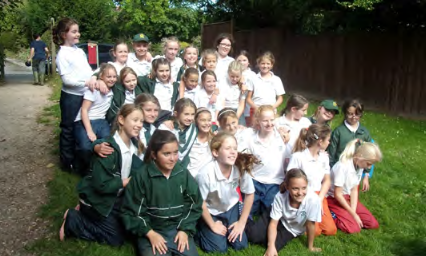 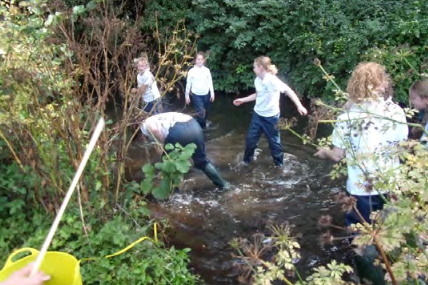 Earlier this month, the whole of J6 went on a rip-roaring river trip along the River  Tillingbourne.

The girls managed to see the river in three different locations: Crossways Farm, Abinger Hammer and Shere church. In each location, they were able to measure the velocity, depth, width and wetted perimeter of the river.

Poppy said that she “liked standing in the 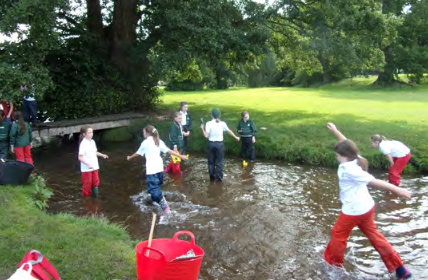 river and measuring how deep it was and how fast the river was flowing. I found it very interesting.”

Isobel added: “I thought it was very exciting, as I love standing in water.”

For others, standing in the river wasn’t such a great experience… “Everything was great, except when my wellies became full of water…” said Natalie.

J6 began their trip by travelling to Juniper Hall, which brought back many amazing memories for some of them, as this is where they went for their J3 residential.

Once there, the girls did a few classroom activities. Their teacher for the day, Ruth, told them where they were going and what they would be doing whilst there.

The girls were put into groups; each group was called a name of a fruit and given a coloured bucket, containing all of their measuring equipment. It included: stopwatch, half a metre ruler, measuring tape, clipboard, a sheet to record the data and last of all, a rubber duck!

Chloe particularly enjoyed using her organisational skills: “I enjoyed recording all of the data and making sure everybody was where they should be!”

As well as cooperating together to measure the different parts of the river and learn some key vocabulary, the girls also had a duck race on the river at Abinger Hammer. It was extremely exciting; ‘grape’ team won the race with a splendid victory.

Olivia said: “I really enjoyed the trip and it helped us to work as a team.”