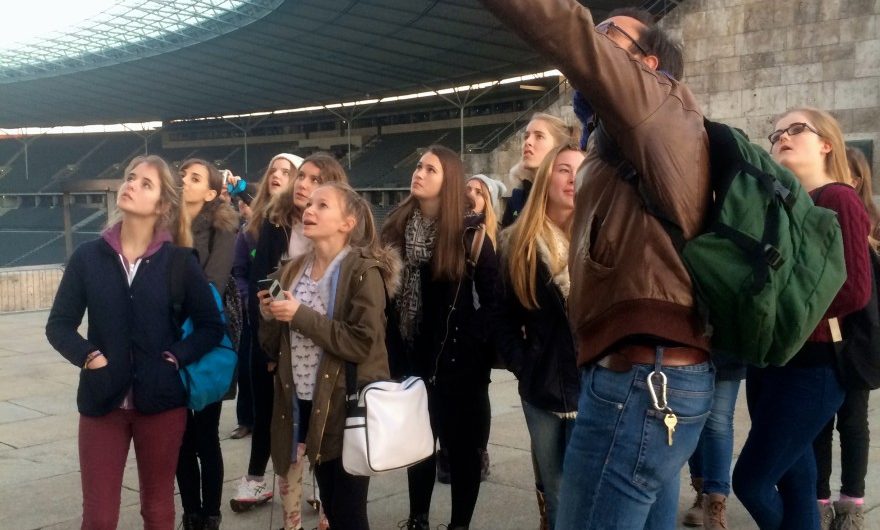 The visit proved a great success with students displaying great enthusiasm for the arduous trip schedule and getting used to long walks, early rises and self-imposed late nights!

On arrival at Berlin’s Schönefeld Airport we met Sam Noble our excellent guide for the four days. We began with a walking tour around some of the most important landmarks in Berlin, including the Reichstag and the Brandenburg Gate as we learned about Germany during the First World War and the emergence of the new Weimar Republic. Some of us got a brief glimpse of Angela Merkel inside her official car! In the afternoon we had a guided tour of the German Historical Museum, where we learned about the exhibits that charted Hitler’s rise to power.  Weary but resilient the girls visited Bebelplatz to learn about the book burning of May 1933 before returning to the hostel for a well-earned rest.

The next day, we made the sombre visit to Sachsenhausen concentration camp at Oranienburg north of Berlin. The exposure to all this history meant students felt a real sense of the tragedy of the period and they impressed us with their sensitivity and intelligent questioning.

In the afternoon we learned about the 1936 Olympic Games in Berlin on a visit to the Olympic Stadium at which Jesse Owens won 4 gold medals, much to Hitler’s annoyance. The girls were relieved to be able to get in some retail therapy before their evening meal at the Hard Rock Café.

On day three we were privileged to witness a moving Jewish ceremony at the Memorial to the Deportation of Berlin’s Jewish Community. We then travelled to Wannsee. This was a very solemn part of the trip as in the grandiose surroundings of this beautiful lake was the house in which the “Final Solution” was decided upon. We then headed back to the centre of Berlin for a walking tour including the Memorial for the Murdered Jews of Europe; the site the Gestapo Headquarters ­ the topography of Terror Exhibition ­ and Hitler’s bunker. By the late afternoon we were ready for some much lighter entertainment, with a visit to Alexanderplatz for some shopping and well-deserved doughnuts.

On our final day, after visiting the Soviet War Memorial and the Memorial to the Sinti and Roma of Europe we began our walking tour Cold War Berlin with a visit to Checkpoint Charlie and the Wall, where Sam continued to inspire the girls with enthralling tales of ingenious methods of escape from East to West Berlin.

The girls were a credit to the school, asking intelligent questions, behaving impeccably and eliciting positive comments from the flight crew. I am sure they will remember this trip for many years to come.