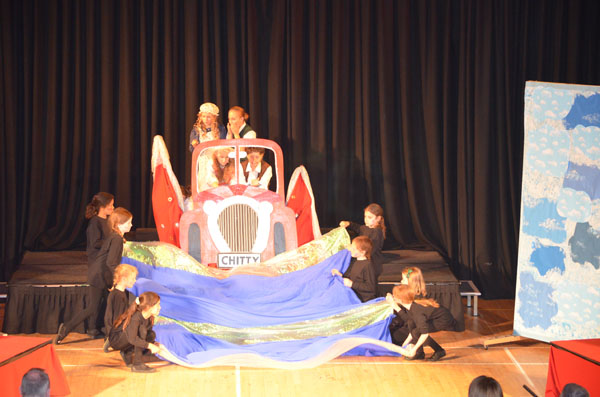 The entire Junior School from Years 3 to 5 were involved in the production with Year 6 playing the main parts, including Jeremy and Jemima Potts, the Toymaker and Truly Scrumptious.

The performance was directed and choreographed by former West End stars Adrian Edmeades and Lucy Holloway, both of whom are part of the Drama Department at Manor House School.  Both Adrian and Lucy were in the original West End production of Chitty-Chitty-Bang-Bang so were able to draw on their wealth of experience to inspire the entire Junior children to become involved and make breath-taking performances in a colourful extravaganza with a car that almost flew …

The girls were supported by an 18 piece band comprised of Senior girls from Years 7-10 (including 4 members of staff).  The all-inclusivity of the drama productions at Manor House represents the community involvement and joy of being in a through school in that the younger girls get to work with the older age groups – Manor House School has a production band for Prep and Early Years Foundation Stage Nativity as well as for Junior and Senior Productions allowing a wealth of opportunities for instrumentalists in addition to its year round ensembles.

Girls in Year 5 danced with bamboo canes for Me Ol’ Bamboo in a complex and fantastic routine that demonstrated the dedication, skill and hard work of the entire cast and staff.

Back stage, lighting and sound were managed by Year 10 and 11 pupils.

To see photographs of the production, either go to Creative Showcase or click here.