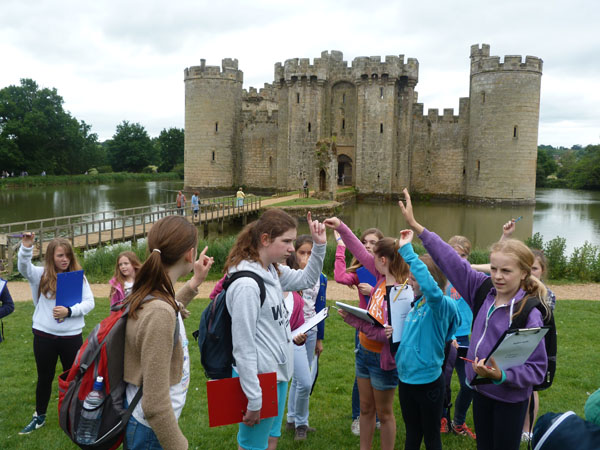 Bodiam Castle is one of Britain’s most picturesque and romantic ancient monuments. Windows where arrows were once fired, a tower that was once a look-out and ruins that were once walked upon by knights allowed the girls to let their imaginations run riot. Enough of the interior ruins survived to give our girls an impression of castle life and to see how wealthy landowners built castles not only to protect themselves against the Revolting Peasants and the French Invaders, but also to show off their wealth and prestige.

After our castle visit, there was a birthday lunch for Emily, followed by a drive to the coast-line to Cuckmere Valley, a haven for wildlife. On arrival we marched up the hill to look at the amazing view of the River Cuckmere meandering down to the iconic Seven Sisters cliffs, before walking through the Downland Country Park all the way to the pebbly beach for a well-earned paddle in the sea.

An exciting night was spent in the 16th century youth hostel with a traditional English breakfast to get us energised for the day ahead. We spent the morning looking at the quaint village of Alfriston including the church.  The Alfriston parish church, dedicated to St Andrew, has Saxon origins, although most of the building dates from the 14th century: it is known, because of its size, as The Cathedral of the South Downs.

An already exhausted group of girls then had a picnic lunch in the grounds of Bignor Roman villa. The Villa is host to the stunning remains of a Roman home and showcases world-class mosaic floors. The girls learnt how the local farmer had accidentally discovered the villa whilst ploughing fields near to Stane Street. We looked at the amazing Roman mosaics of Medusa and Ganymede and considered what a huge Roman farmhouse had once been on the site. The girls learnt what it was like to live there 2000 years ago.