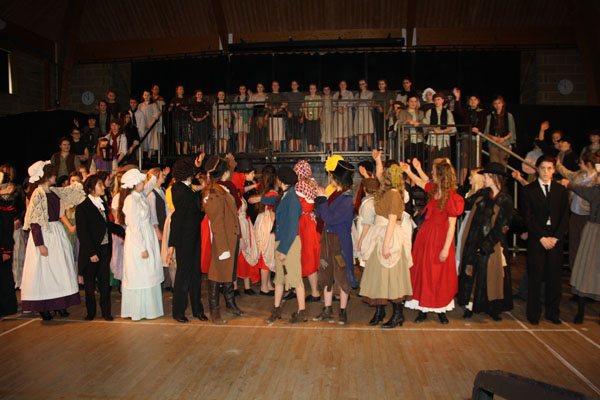 We staged our Seniors’ production of the British musical, Oliver! last week starring a record 125 of the students and with one special guest making their acting debut. Our Seniors’ production – this year based upon the novel Oliver Twist by Charles Dickens – was played to packed houses over three nights and starred ‘Patrick’, a seven year old Parson Russell Terrier disguised as Bill Sykes’ dog, Bullseye.

GCSE Drama is an extremely popular option at Manor House School who specialise in Arts and Drama as part of their GCSE curriculum with girls performing in the annual and national Shakespeare Festival at Leatherhead Theatre. Girls are choreographed by Adrian Edmeades who works at Manor House part-time teaching Junior Drama. Better known for his role in the original ‘Cats’ production in the West End, he is currently working on the production of “Phantom of the Opera” at Her Majesty’s Theatre.

Oliver! is one of a long line of major productions held annually at Manor House, including Grease, Annie Get Your Gun and many others. Girls are involved in all aspects of the production from creation of the scenery and props, to the lighting and sound (including running a 16 mic sound desk), music, acting and chorus line.

Miss Zara Axton, Headmistress commented “Over 125 of our girls participated and the production was all-inclusive in the sense that everyone who wanted to be in it, was. Our productions are a valuable tool in promoting self-confidence and communication skills, as well as being incredibly enjoyable.”

Music scholar Kathleen Strijdom in Year 6 played violin and joined two other students who played as part of an 8-piece band including a mix of professional musicians, and teachers.

Instead of hiring in a professional orchestra, we always have a mix of instrumental staff, professionals and girls to support our major productions, so the girls have an opportunity to play difficult music and improve from playing alongside a high standard of talent around them.